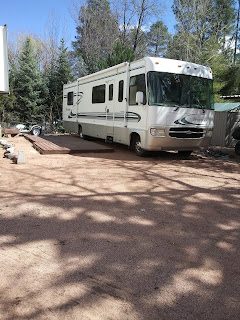 I have been mostly recovering from the move since I got here.  I have gone back to the Valley 3 times.  Once for my mamogram cancer checkup (all is well), once to empty out the used shed I bought in my park down there so it can be moved to my site, and once to pick up a large order of yarn that I place before I realized I wouldn't be around to receive it.

I did a larger shop for Mom one of the times I was down there and the shelves were mostly stocked.  I did run into the item limits when I tried to buy 4 cans of pork and beans and the limit was 2.  Most everything else was available.   I haven't shopped up here yet so I don't know if I just happened at a time and place that worked.

The rest of my medical appointments have been canceled.  We will pick back up where we left off when life is back to normal.  It is only an hour and a bit drive down to the Valley, so being up here isn't a block to that.

I finished the shawl I was knitting.  I need to figure out how to block it and then I'll post a picture.  I like it.

That is mostly what is going on here.

I sent a picture of the motorhome settled in its summer spot but the picture was too large.  Now to get everything hooked up and sorted.  I heard we are expected to get snow next week.  Sigh.  At least I'm in the same town as Mom now.
Posted by Shadowmoss at 2:41 PM 3 comments:

On the road again, for now

Verdict was, I can't use my brakes much at all when towing as they get hot and stop working.  I need to use the transmission.  I'm half way to my summer spot, stopped at a brake check pull off.  I'm learning why all the signs and such are on these highways showing a downhill grade.  My speed is ranging from 40 to 50 mph.  It is dual lane so people can get by me.
Not sure this is a long term solution.  May need a dolly with electric brakes...
Posted by Shadowmoss at 12:05 PM 2 comments: 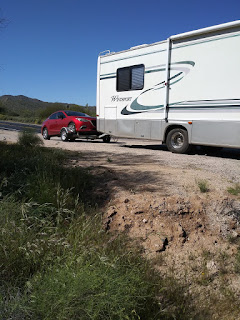 I decided to head to Payson early to be near Mom for the pandemic.  I had the brakes on the motorhome replaced by a guy in the RV park who is a retired mechanic about a month ago.  I started smelling them and pulled over and had almost no brakes.  I called him and he is on the way out here.  Luckily I'm only about 15 miles out.
Note to self:. Don't block the bathroom door when stowing the rolling cabinets for travel, even if it is a short trip...
Posted by Shadowmoss at 10:37 AM 2 comments: 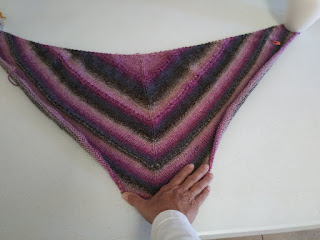 I am finally at a proper point to share a picture of my shawl on a Wednesday!  Otherwise known as WIP Wednesday.  I took it off the needles to measure it.  This is one skein of Lion Brand Ferris Wheel yarn.  I am really enjoying making this shawl, every row makes it look different.  I will add at least two more sections.  I wanted to see how it looks off the needles and I'm glad I did.  It seems smaller off the needles and I know for certain it needs more length.  Right now the neck edge is 40" and it is 16.5" from the neck edge to the tip.  I would really like to have it finished to take to Vegas, but that may be too ambitious.
Posted by Shadowmoss at 12:16 PM 3 comments:

I am knitting a shawl that is the most fun I've had knitting in a long time.  Only issue is that my hands start aching and don't work after a while.  Pictures when it is when I next post from my phone.  I'm on the computer right now.  I had 40 spam messages in the past 12 hours to delete.  They have found me...

On Friday I finally got in to see the endocrinologist.  On March 10 I have an ultrasound of my thyroid.  The doctor was somewhat dismissive of my saying I want it out as it is causing issues with swallowing, some talking (needing to clear throat or drink), and now breathing.  Once he sat me on the table and felt my throat he walked out and came back in and ordered the ultrasound.  No idea on timeline or anything else.  Last two ultrasounds the (different) doctors weren't concerned about the size.  It feels larger now, at least to me.  It has been biopsied and isn't cancerous so that shouldn't be an issue.

My 2 and 3 year mammogram cancer checkup (I missed the 2 year one as I had not great insurance) is March 25.  I also have an appointment with an ear nose and throat doctor on the 27th for another issue that is impacting my speech.  There was a reason I put a hold on longer distance trips, needed to get all this scheduled and it wasn't happening quickly at first.

March 15 I head to Vegas again, and I may go a day or so early to camp and explore the area of Arizona on the way up.  March 18-25 my Mom's two sisters will be here and Mom will come down and stay with me while we explore.  Mom turns 89 on March 24.  We will take her to the Organ Stop pizza place to celebrate.  We know how to party.😊

I am continuing to walk 1-2 miles around the RV park every day.  When I find myself spinning around in circles mentally, I walk.  I get a lot of exercise.  An earlier physical exam found I do have breathing issues.   I had thought I was just getting further and further out of shape as when I did do anything I was panting.  Turns out I can't breathe.  Hopefully it is related to the thyroid issue.  I do have an ENT appointment to look at things from that direction as well.

I had the motor home work done.  The brakes were replaced.  The rest of the issues are mostly cosmetic, except he says I no longer have tail lights.  There are some minor electrical issues, mostly related to the the cable for the backup camera dragging a couple of years ago and apparently shorting out the speedometer.odometer panel.  I know the fuse I need to replace now that my repairman un-shorted the cable underneath.  Hopefully that fixes the tail light issue.  I also now own a car tow dolly, which I bought from the same guy.  He set it up and verified I now have everything to tow the car.  Except for the whole tail light issue.  Being able to tow the car with me will make my moves between locations much easier.  I admit I am nervous about towing.  I have towed behind moving trucks almost as long as my motor home going cross country a couple of times, so hopefully after getting on the road with it all I will be fine.

I have been given the ok from the managers to move into a spot further back in the RV park next year.  It is on 'dog row' where folks with dogs have to park.  There are less than 10 RV spots in the dog friendly section, the rest are park models.  I said I want to get a dog so they gave me a spot where someone (who has a dog...) is not coming back next year.   I have put out to the Universe that I want a dog.  Small, quiet, low-shedding, laid back personality.  Basically a unicorn dog.  My neighbor in Payson has a dog that I'd love to dog-knap who meets all these criteria.  I'll ask her if she know what kind of mix Cindi-dog is.  I know she was a rescue, and any animal I adopt is always a rescue.  I'm in no hurry, I'll wait to find the right dog.  Bosley will not be amused.