Home Sweet Hotel Suite.  Still seems funny to come home to an empty place, with no animals.  With only a couple of month here and there holes I had cats and dogs, usually both, since about 1974.  The cats I had adopted a few months prior to moving to WA ended up getting to go back to their original home when I moved down here.  They are happy.  I'm no so much.  Oh, well.  Old Fool's videos of his kittens brought this on.

So, tomorrow I'll see when I can reschedule the Microsoft test again, and will head back down to Teguc.  Between now and then I will actually sit my tail down and study.  The trip home was uneventful.  Luckily they seem to be having mechanical issues with the big school buses that the post usually sends on these trips, so we got to ride home in a nice air conditioned van.  Everything worked out really well this trip.  Except for not passing the test, that is.

I am in the capital of Honduras, Tegucigalpa, for the weekend.  The theoretical reason is to take a Microsoft test (that I bombed badly), but really it is to give me a break from my usual surroundings.  I'm in the InterConental Hotel.  They take really good care of me here, mostly know me by name, are across the street from the Multiplaza Mall, and have a special rate that I qualify for.  What's not to like?

I took the 'Executive' bus up last night after work.  I was worried about getting into Tegucigalpa in an area I'm not familiar with (which includes most of the city), after dark and having to get a taxi in a city where most do not speak English.  As I was waiting for the bus to leave 2 of the soldiers in their civilian clothes walked up.  We stick out like sore thumbs down here.  They were going to a different hotel in the same area as the IC and so I shared a cab with them.  I feel fairly safe when I have 2 young male American soldier-types to watch out for me. I was glad to have their company as it was raining besides being dark when we arrived.   And so I paid 70L, which is about $3.50 for the bus, and 100L, about $5, (a bit more than my share to repay the kindness of having the protection) for the taxi.

This morning I studied for a couple of hours, but it obviously wasn't enough.  I had the doorman tell the taxi driver where I needed to go for the test.  I was only about a mile away, all uphill.  The people at the test center were nice.  I failed the test, then walked downhill to Dennys for breakfast.  When I asked the test center guy for directions so I wasn't wandering around the hillside lost, he said he could give me a shortcut, but it was lonely and known for assaults. So I asked for the longer way, and it was less than 5 minutes to Dennys.

No one spoke English at Dennys, but I managed to order, eat and pay for breakfast without incident.  I just have to let go of the outcome when I order, but since most of the chain restaurants here have the name of the meal in English, I just can't tweek the basics like I used to do when I shared a common language with the wait staff.

I walked down the main boulevard from Denny's back to the hotel.  That took about 10 or 15 minutes.  Figured out where the Do It hardware store is that I had been to when Chris was here to drive me around.  Walked past the President's house.  It said Casa Presidente and I was wondering it it was the actual place when I noticed all walls and fencing and a couple of Honduran soldiers guarding the gates.  I think it really was his house.

Got back and decided to check out the Mall.  Ended up getting my hair washed and trimmed. One woman knew a few words of English, so I could make her understand what I wanted as we both used hand motions to fill in the gaps.  The woman who was going to wash my hair asked me a question and I think the only thing my attempted answer in Spanish told her was that I didn't understand a thing she asked.  I walked out with what I wanted, and a 10 minute detailed application of conditioner.  I think that happened when I asked her to braid it for me as it had been when I walked in.  Oh, well, looks better down anyway.

A nap back at the hotel, some more wandering around the Mall.  Every display TV is tuned to a soccer game, and there are crowds cheering intermittently around the TVs.  I got a cup of coffee at Dunkin' Donuts and just looked.  If you notice that the restaurants are all US chains (or at least we assume they are originally from the US...), well, that's the way it is here.  It's the US, only in Spanish, on the richer side of town.

Tomorrow I'll catch the free bus from the post back home.  No plans for the evening.  I
didn't bring any nicer clothes to go out in, and I have no real need for entertainment
anyway.  And, I'll be back soon to retake the test.  No pictures this time because
yesterday when I tried to take a picture of the tree with the combination of orange flowers and green leaves that it now has, I found that the battery in the camera was dead, and didn't have time to dig out my charger before I left.

I haven't ordered from they yet.  However, I found that they have black bean flakes!  I used to almost live on those before they got difficult to find.  Mix up some black bean flakes with water, heat up some flour tortillas, and sprinkle on some feta cheese.  Multi cultural good eatin' from things that would stay fresh for a long time (the cheese in the fridge).

As I go along I'll run back across the links I used to look at a lot.  I don't cook, don't keep fresh food around because it just goes bad on me.  Here in Honduras I have a microwave, a rice cooker, couple of slow cookers and an electric skillet.  The dorm size fridge doesn't hold a lot, but keeps my slim fast shakes cool.

I did make some split pea soup in my small slow cooker today.  It turned out good.  I miss the thick soups down here.  It doesn't get cold, so a lot of the slow cooked comfort foods I like are just not available easily.  Wish I'd had some dehydrated carrots and tomato bits to toss in, but it turned out ok anyway with just dehydrated onions, basil and oregano added.

This post is for tffnguy at http://terlinguabound.blogspot.com/ who is dealing with 100* temps and not refridgeration.  I mentioned that the backpacking survival sites have a good selection of dehydrated and freeze-dried foods that don't need special storage or long cooking times.  So, here is a partial list done up quickly.  As I come across or remember other sites I'll let everyone know.

They have stuff in 1 cup bags with a ziplock, a good way to sample to see if you like
things.  Good selection of veggies and beans, but I don't like their tofu, and anything
that sounds like meat will have -ish after it to show that it's really flavored tofu.  This
is my go-to place to keep veggies on hand.

This place has pretty much everything.  Not particularly the cheapest, but a really good
selection.  Not everything is dehydrated/freeze-dried, so watch out with beans and such
that you can buy locally probably cheaper.  Make sure you are getting the dried stuff,
which is quicker to cook up with less fuel.  I haven't ordered from here, but they have
been around for awhile.


If the above look like just 'ingredients' rather than food try the next site to see how to
cook with this type of food:

Lots of 'recipies' and good tips on how to eat well while backpacking or camping.  Or living off-grid?


Some places with complete meals, again not the cheapest but factoring in storage and
cook fuel and ability to keep on hand they are a bargain for some folks:

I have ordered from Hawk Vittles.  They are really good.  Again, not the cheapest but they store for a long time and you can use the freezerbag cooking style to make them.  Basically add boiling water and put in a coozie (cook it in a freezer zip lock bag if you want...) for the allotted time.

I mentioned in my comment on his site a free to make soda pop can alcohol stove, and miss spelled the type of fuel usually used.  It's denatured alcohol, and its the HEET brand in the yellow bottle. 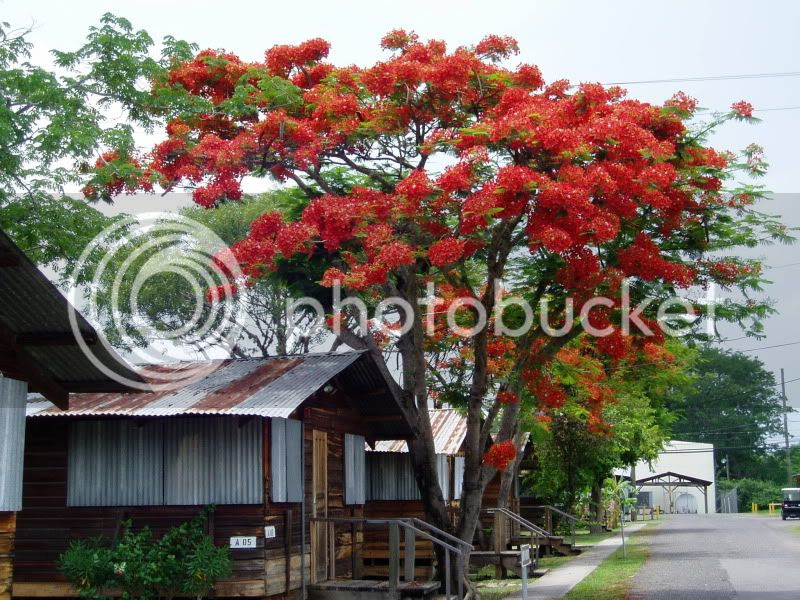 These trees are amazing to me. The cycle seems to be that they look bare, dead. Then these red/orange flowers bloom. Slowly green leaves start to show, then they are all green. Then they produce long bean-like pods. Then they go bare again. I've watch the cycle a couple of times since I've been here 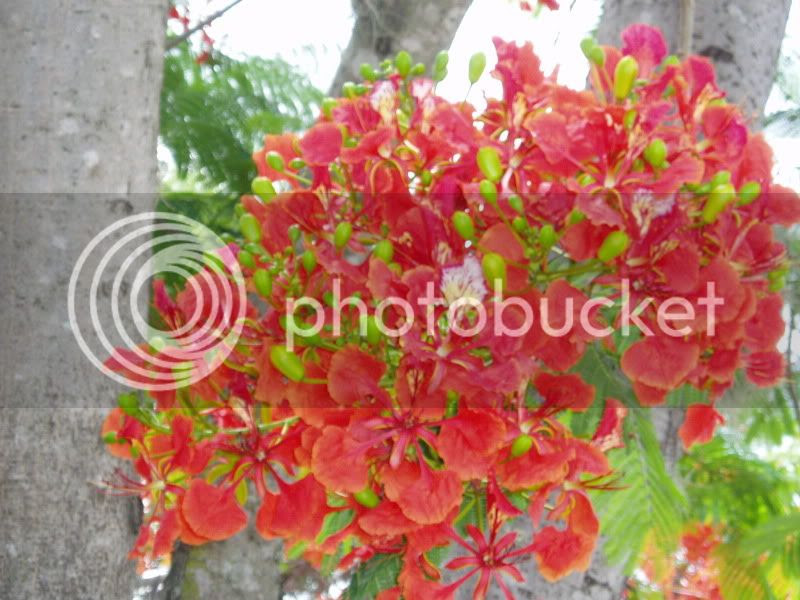 And here is a closeup of a bunch of the flowers.

And, I promised a picture of the afghan. 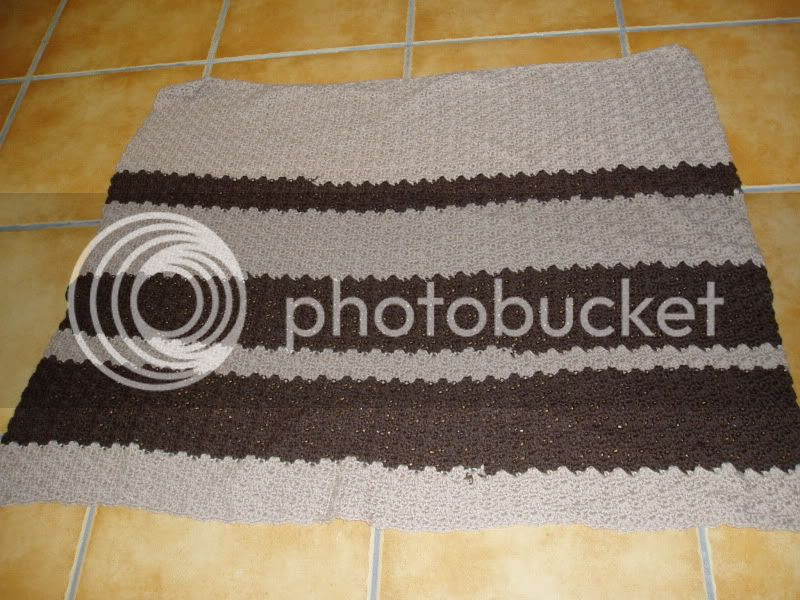 A simple shell stitch. Used up 2 colors of yarn from my stash. My next project is going to be knitted slip covers for my netbooks. More to use the yarn than any need I have. Just can't find a useful thing to knit for anyone down here in the tropics.

I'm moving through the dental work.  I got my temporary crown yesterday afternoon.  It is a single piece that covers both teeth.  From the 'outside' it looks normal, fairly amazing since he fabricated it right there in the office.  Not sure if the permanent crown(s) will be the same.  Next appointment is a week from now, and he will take impressions for the permanent crown(s) then.

How does my apartment suite get so messy in a 4 day week?  Started in with the laundry and will start with the cleaning when I finish this.  After reading a few blogs I figured I'd better update this one before I get too sidetracked.  I have some pictures I took of the blooming trees here, and I will take the often-promised picture of the afghan I crocheted.  But, first, housework.

Posted by Shadowmoss at 8:07 AM No comments: