What do I want?

I have the details of my  life settled down for a bit here. I’m basically house sitting at Mikes out in the middle of nowhere.  I am getting some of the small things accomplished that I never get around to.

I have finally signed up for health insurance for the next 3 months.  I need to check on it on Monday.  Boy, is that ever a messed up process in this state.  Since my checkups this month all came back as clear, no issues (thank God for not so small victories), I’m just counting on not needing medical care for the rest of the year.  I have catastrophic insurance, in that I pay over $6K before it pays anything.  I don’t pay anything out of pocket for the insurance, though.  I have a lot of thoughts on how this, among a few other things, puts me in the ‘poor’ demographic and what some of the emotional and social issues are that follow along.  Not for this post, though.

I was idling around on the internet a few days ago, and came across some old-school motivational audios on YouTube by Earl Nightingale.  Some interesting stuff there.  It has me thinking about what do I want, what goal(s) do I have now that I am retired.  I decided that I want to live a ‘competent life’.  See, especially after the wreck of my car my nerve started to evaporate.  I decided that I was not able to ‘gut check’ things as I usually do because my ‘gut’ put out a Do Not Disturb sign and went away to curl up in a fetal position for the duration.  I needed to drive the motor home down to Williams to dump the tanks, but the wind has been really fierce and I Just Didn’t Want to Do It.  I didn’t water Mikes garden last week, again because with the wind I just sat in the motor home and did nothing.  I felt my world becoming smaller because I was losing my nerve to get out.

Earl Nightingale said, make a goal.  Ok, a competent life, where I can   actually do things, have confidence again.  He said, banish negative thoughts.  Wow, do I have a lot of those.  Ok, I just repeat mentally ‘competent life’ over and over.  A lot.  I got off my duff yesterday morning before the wind was at its worst and dumped the tanks.  Yeah, me.

I was going to go hiking this morning at the Grand Canyon.  I’m not all that far from it, and with my Golden Geezers pass it is free to get in.  But, you know, it was chilly this morning and coffee and computer time was going so well.  I decided that I’ll be busy tomorrow anyway, so maybe next week I’ll go hiking.

Then the phone rang.  A friend, Lesle, that I met when I was in Jr. High.  We reconnected when I was living in WA, and off and on since, but not for over a year.  She never calls me out of the blue like that, what with email and all.  Her words were ‘I just called to tell you I’m dying.  Sorry, I don’t know a better way to say it.  I’m calling my friends to say goodbye.’  She has advanced pancreatic cancer, a fast devil that she first found out about less than 2 months ago.  We talked for a few minutes.  I got off the phone and went hiking.  Because I can. 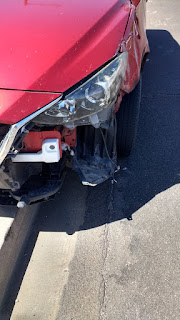 A guy turned into me.  This car is doomed.  Just got the dent on that fender fixed.  It is now sitting in the back seat.  I'm fine.  Frustrated, but fine.
Posted by Shadowmoss at 2:32 PM 8 comments:

I took a short walk today 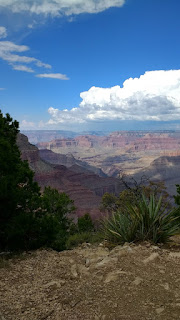 I woke up today and decides I needed a walk.  Luckily I an about an hour from walking out my door to some nice scenery to enjoy on my walk.  I walked a mile, but road shuttle busses and saw more of the Canyon.
Posted by Shadowmoss at 4:50 PM 3 comments: 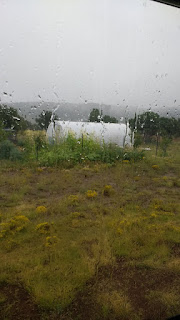 Northern AZ is not Florida or Cuba, but we are also having a rainy day.  It is also chilly.  I just put on another layer and I wish I'd remembered to grab my afghans from the storage unit before I left.  It is 60* in here.
I could probably talk Mike into starting a fire in the woodstove, but I'd have to walk in the rain up to the house.  I'm making oatmeal (old fashioned cook type) and hoping it warms things up.  Or I could just turn on the furnace.  I'm trying to be bada$$ and just get by without using resources.  I may fail at that.
Posted by Shadowmoss at 9:45 AM 5 comments:

Lazy day.  Cloudy and breezy, so cool.  No mice to be seen, at least by the napping Bosley.
Posted by Shadowmoss at 1:13 PM 4 comments: 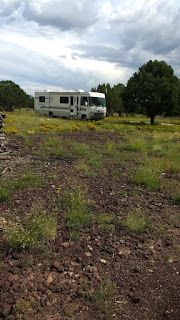 I'm parked behind Mike's place up by Williams, AZ.  He let me plug into electricity, so I'm not really off grid.  One step at a time.  It is marginally cool enough without the air conditioner, the extension cord won't support my roof air conditioner, but I brought a small floor fan that keeps a breeze going.  He is working out of state for most of the next two months.  I'm watching the place and watering the garden.  Bosley is on mouse patrol.
Posted by Shadowmoss at 3:37 PM 7 comments: