A friend came over from CA and Mike and I are giving her a tour of the area.  Today, the Grand Canyon, tomorrow Sedona.  I drove the motor home up and parked it at Mike's place.  Plan A was the forest outside of Flagstaff, but the rains have made it too muddy.  Family came through to see the Canyon today as well so Mike played tour guide for all of us.
Posted by Shadowmoss at 5:08 PM 5 comments: 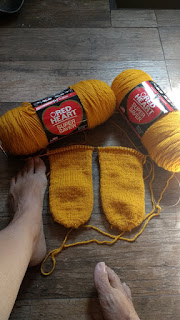 I even made it on a Wednesday!  Some blogs, much more organized than this one, have certain subjects on certain days of the week.  I'm lucky to figure out the day of the week after a couple of wrong guesses.  Anyway, the socks are looking like socks now.  I didn't put enough information last time.  I'm knitting toe up, 2 at a time, magic loop socks.  That basically means I'm knitting both at the same time on a circular needle.  I'm ready to start the heel now.  Foot for scale.
Posted by Shadowmoss at 9:24 AM 7 comments: 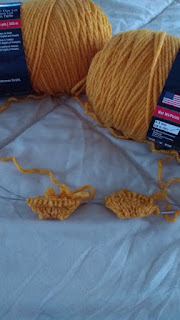 I should really explain that these are more 'bed socks' or slippers.  I'm practicing on larger yarn so that when I use nicer, more expensive sock yarn I may know what I'm doing.  I got this yarn for $1 a skein at a thrift shop.  Judy's magic cast-on and then I knit the tail along with the main yarn on the next row to double the stitches.  I'll increase stitches in some pattern yet to be determined until it looks like it will fit around my foot.  What can possibly go wrong?  Well, other than the first round I knit with the tail instead of the main yarn.  I switched over when I got to the main yarn again.
Onward.
Posted by Shadowmoss at 3:12 PM 6 comments:

Now that we have affirmed that Live Writer works, I guess I’ll write a post.  It won’t have a picture because I’ve been putting off taking the picture all day and if this is going to get written and posted today it won’t have a picture.  Don’t try to make sense of that.

I started some sprouts last night.  I’m using the new, improved sprouter I bought last year, or whenever it was.  The mix has all kinds of weird named lentils and other odd legumes.  So far nothing is showing any sprouts.  Forget the hype about sprouts in 24 hrs with the new, improved methods, I guess.  I’m kind of relieved about it, actually.

I started a new pair of socks.  Actually I watched most of Judy’s YouTube of how to do Judy’s Magic Cast-on.  I’m making up the pattern as I go since I know how many stitches I used last time, and the pattern I’m using this time is for bulky yarn.  I’m using worsted yarn and needles 2 sizes smaller because apparently I knit very loosely.  I’ll probably end up starting over a few times till I figure it out.  I meant to have the picture of the first few rows in this post.  I have to get that far in order to do that.

I’m still shredding paperwork.  I’m finding paycheck advices from 2005, and contract paperwork for a house I ended up not buying as well as all the buying and selling paperwork (a lot) for each of the houses I’ve bought and sold.  I’m making some progress.

It rained again today.  The Monsoons are here.  The temperature has dropped nicely.  I may survive.

I have been using my phone to do most of my blog posting as I can just send an email and it posts.  Only 1 picture per post that way, though.  I now have good portable internet, so I decided to try posting from my computer a few weeks ago and had issues.  I now have time to troubleshoot.  I’ll try posting a picture with this to see if that was the problem, or if it was just a temporary glitch.

This is a random picture of my sprouting seeds.  I need to get back to sprouting.  Now to see if this will post.  If you see it, then it means I need to get going on stuff to post about.  I’ve always known that is my blog is (even more) boring, it means I’m just sitting around vegging too much.

This is a test

Testing Live Writer as I haven’t used it in awhile.

Posted by Shadowmoss at 10:07 AM No comments: