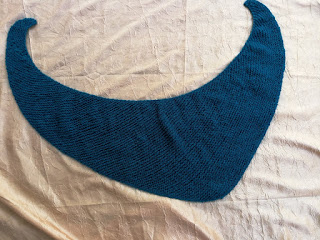 The boomerang shawl is finished. It took longer than I intended because I dropped some stiches and had to pull it back to fix the error correctly. I will send it off tomorrow to my friend in MN.

I've been working on the motorhome. There is now an external propane tank next to the motorhome so it can be taken and filled by itself rather than having to drive the motorhome out every time I need propane. The outside shower in the back bin developed a leak and filled the bin with water. It is more or less fixed now. At least it no longer leaks I am attempting to drill a hole in a cabinet door to route the propane hose for my Mr Heater propane heater so I don't stumble over the open door like I did all last winter. Something isn't quite right with the drill (the operator?) And it has been a few years since I actually did much of this type of work. I'll get there. Jim Dixon is still back East so I have to muddle through doing it myself.

Life updates... The trip back East was hard on me. My right leg and hip start hurting now when I drive long distances. I had already committed to the Moab trip right after I got back so I decided to go even though I wasn't quite recovered from the previous trip. I ended up putting my back out after the hike and coming home early. All this points to the fact that I need to get into shape to live the lifestyle I want. I have rejoined a gym, and just going through the motions on the machines shows me how much I need to get some core strength back.

Mom did fine on the trip, better than I did. For the first time she didn't say that was her last trip once we got home. Most likely we will head back to see the family again in the spring. Hopefully we are finished with funerals for now.

Boseley was not happy to be left behind while I traveled even though the neighbor who took care of him did a good job. I have made the decision that I will take the motorhome to Quartzsite in January rather than just the car. That way Bosley will be with me. That is easier on both of us. Working on details as to how to get both vehicles there as I still don't have a way to tow the Mazda.

I'm sure there was more, but this is enough for now.

Another view from Arches 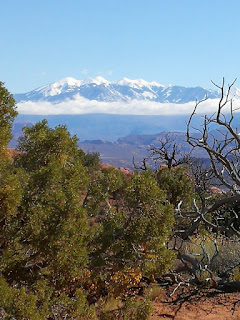 Landscape Arch was the correct answer, however New Hampshire and New York City we're close (sort of). A group I follow on an online forum planned this weekend gathering awhile ago and I decided to join them. Exploring is more fun for me sometimes when there is a loose group to hang with. One of the guys wanted to do some hiking in Arches National Park and invited me along. It was fun.

Guess where I am 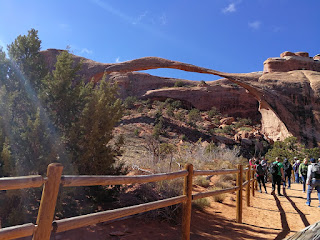 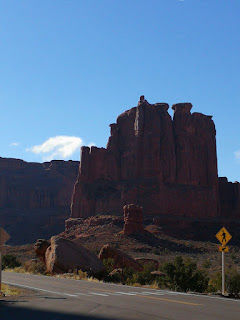 I'm in Moab for the weekend. I'll catch up on life here soon. For now I'm off to walk and take pictures. Why? Because I live in the Southwest and have these awesome places close by, a fact that I am just realizing.