I am a week into my 3 week vacation.  Actually, the last week I'll be working, but it will be in Tennessee so it will seem like vacation.  I'm sitting in my Mom's living room, half dressed, reading blogs on my laptop.  Mom is still in Kansas City.  I'm 'supposed' to be up in Kentucky with friends at a campout.  I'm too tired of traveling around, and am taking down time.  I have learned a lot the past few days.  I learned that the Molly Mac Pack that I got last September at the hangout is not a good fit for me.  Too much fiddle factor to packing it right.  So, I'll leave it with Turtle Lady to put back into the silent auction at the hangout next September.  No need to lug it back and forth to Washington.  I learned that I'm eating waaaay too much sugar and I'm getting fat.  I learned that I need to try on clothes when I buy them because I'm not just a medium now, I'm a large...  I'll go to the outlet mall here and return the things I got at the outlet mall in the Smokies.  I've learned that I need a place, spot, somewhere I can just sit alone, a bathroom I can use as long as I need with no one around, someplace that I can just 'be' when I'm traveling.

I'm  also realizing that this is Mom's place because her stuff is here.  She moved here after I was last back in Tennessee, so I've never been to this apartment before last night.  She gave me the key to get in while we were both in Kansas City this past weekend.  So, I'm weighing the value of 'my stuff' vs. getting rid of everything.  I need to find the middle ground as I go through my storage unit this next week.  I need to figure out what things mean 'home' to me.  Apparently some of the stuff still out here meet that, because my apartment in Washington just doesn't totally feel like home.

Oh, and I also learned that I totally miss my cats.

Posted by Shadowmoss at 8:01 AM No comments:

Bits and pieces. In my check around the internet of interesting blogs I was directed to this guy's blog: http://theflyingtortoise.blogspot.com/ He's in New Zealand and lives in an RV of sorts. The ones he writes about are much different that the ones here. Below is a picture of the inside of the RV owned by a lady called Jypsy Jude: 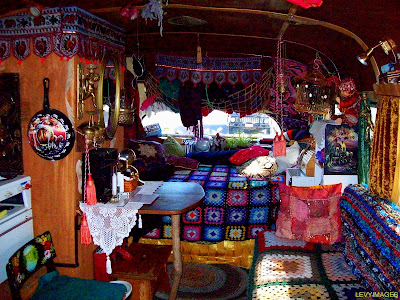 I wish I was artistic enough to make my living space look so cool. Kind of the opposite of the minimal look I've been heading towards lately. For more cool pictures of her and her RV, head to The Flying Tortoise blog.

Speaking of headings lately, I'm actively embarking on change now. I am looking for a different job, in a different location. Perhaps even a different country. I'm trying to stay open to the possibilities. If you are of a type to pray or otherwise discuss things with the Greater Power of the Universe, please put in a word for me to be lead to where I need to be.

I start packing this weekend, and looking at my possessions in a more immediate way (as in, how the heck can I move (again!) all this stuff) both here and while I'm in Nashville. This time next week I'll be in Kansas City visiting family. Actually, next Saturday about this time Mom and I will be heading to the cemetery to put my Dad's ashes in the ground. I'll visit with family on Sunday and then head on to Nashville on Monday.

Tonight I'll head to the mall for a book to study for more certifications, then probably head to the casino near there. If I play the machines for 2 hours I get a free buffet, and I've been going there a couple of times a week now. It's the best I eat since I get salad, vegetables and real food in general. Not a lot of those in the rest of my life right now. It will be a good thing for me to make major changes in many ways, with my diet as well as getting away from the casinos being two of the main things.

Mom just called to update me on the flooding in Nashville.  It sounds bad.  Ironic that I've been reading all weekend about Katrina and preparing for a disaster, and my home town (adopted, anyway) is experiencing one.  Mom is fine so far.  While her apartment is close to the Cumberland River, she is in a second story apartment.  She has food and has stored water in jugs and the tea kettle in case the water supply gets contaminated.  She has it better organized than I do at this point.  Heck, she's more organized than I am in most ways.  My thoughts are on Nashville right now.

Posted by Shadowmoss at 10:35 AM No comments:

I haven't been in a mood to communicate.  Still trying to get out of this slump.  It will happen one way or another in a few weeks since I'm headed first to Kansas City to meet Mom to inter my Dad's ashes and briefly visit with family, then on to Nashville for 3 weeks.  I'm starting to pack now.  Slowly, but it's starting.

I was reunited with a site that I've been wanting to find again, and it happened in a strange way.  I was talking with one of the pilots at work.  As often happens after I make one of my rare appearances in a skirt at work, he was making conversation aimed at encouraging me to wear them more often.  I said that I was ordering a Macabi treking skirt, and he (kidding) suggested we should get matching ones.  Others in the office heard him, and Googled 'Men in hiking skirts' and found a site that shows a guy in the Macabi skirt.  It's quite a strange sight for these military guys, and the joke went around with the pics saying that this was the new regulation flight suit.  When I saw the picture, I said 'hey, where did you get that, I'm looking for that guy's site!'  This was funny to them, the fact that I recognized a, to them, random picture from the internet.  However, Shane is also a hammock camper and that is how I'd found him a few years ago.   He also has an extensive part of his site dedicated to his experiences living through Katrina.  He turned it into a site that gives amazing detail on how to be prepared for a disaster.  This isn't the 'have X number of gallons of water stored in your bathtub' type of disaster planning, this is 'here is how you have what you need to do things like find a job, have your medical history with you...' and other details of rebuilding a life after losing most of your possessions in a fire, hurricane, or whatever.  The site is:  http://www.theplacewithnoname.com/   This dovetailed neatly with the minimalist sites that talk about digitizing important papers and such, and that was why I was wanting to find him again.  He gives such wonderful, detailed, step by step directions.  That's where I've been the past couple of days, reading it all again.

Mundane things:  I joined Costco awhile ago.  I don't buy all that much stuff, but there are things that I do need from a larger place like that, or are at least cheaper there, such as kitty litter.  I took a chance and tried their 'all natural' brand.  It works well.  I needed dishwashing detergent last week.  I've been getting the cheaper Sun brand, but it runs out of cutting power too soon for me.  I was resigned to getting a more 'brand name', but when I went to Costco they had their own 'all natural' brand.  I tried it, and I really like it.  It didn't hurt in these cases that the 'all natural' store brand happened to also be the cheapest.

I'm starting the search for a cheaper apartment.  After I get back from Nashville I only have 2 weeks to decided if I'm staying here and paying $200/month more rent, or moving. Today I'll drive around and look at the neighborhoods around a few I found on the internet.  I'm also looking at going to a 1 bedroom or studio.  This should light more of a fire under me to get rid of the stuff that I'm having a hard time letting go of.

I think that is most of what's been going on.

Posted by Shadowmoss at 9:50 AM No comments: