This morning was another trip to the dentist.  This in itself is amazing.  I stopped going to dentists about 35 years ago.  My last adult venture with dentists got all my cavities fixed.  I'd had braces as a teen, and everything was fixed and filled.  And, I was done, emotionally and nerve-wise, with dentists.  The few times since that I'd gone to a dentist, they just pissed me off.  I didn't like the attitude of they 'owned' my teeth, would tell me what they were going to do to them, and my only part was to pay huge amounts of money to them and be so very grateful they had taken their precious time to deal with me at all.  I might, just maybe, have some baggage from the years of having so much work done as a kid...

I tried to start the process of getting my teeth back to optimal condition when I was back in Washington State.  It went like a lot of things there.  Very pleasant female dentist, clean modern office, and more money and extra charges than I could even fathom even with very good insurance.  The estimate came to over $30K, after insurance, and oh, in 3 weeks at the end of the year her prices jumped 100 percent.  And, can't even start on the simple stuff until I have a full 'scaling' (they really should rename that...), even pulling my one tooth that needed to come out was iffy until then.  The receptionist treated my like I was one of the unclean to even suggest that an appointment could be made for anything else before the 'scaling' to bring me up to the level of someone they would work on.  That ended badly for them, in that I didn't go back.

Down here I really needed to get some of the work done.  I found a good Honduran dentist who speaks very good English.  He has an assistant who wears jeans, and a wife who fills in if the assistant isn't there.  I feel like I'm a guest in their home since the office is the front part of their house.  He is professional, don't get me wrong, but he also is a human.  I was so nervous the fist visit that he looked at me when he sat down beside me, and softly explained "I'm a Christian, and if you don't mind I would like to pray before we start".  I said "I'll take any and all prayers I can get", so he said a brief prayer that took the tension in the room (mine...) down a notch, and then we began.

So, I now have 2 permanent crowns, a temporary crown over two other molars until next week when the permanent crowns will be in, and today he spent two hours of concentrated work on my top front teeth.  He said 14 cavities.  In 6 teeth.  He basically rebuilt a couple of them.  Total cost today, 5,000L, which is $250 more or less.  He still has some polishing to do, and some shaping.  My two front teeth have outlines that look a bit like a-line skirts and there needs to be some more shaping done on the insides as my teeth don't exactly close all the way.  This is my fault.  I told him it was fine, since after 2 hours I was, as I say, done.  We'll tweek it more when I go in to get the permanent crowns.  Which is why I like him.  He works with me.  What doesn't get done today, we'll do next time.

I usually have the early appointment on Saturday mornings.  Which means I'm there while they open up.  They pull up the metal shutters over the door an windows, then take bowls of water out and wash the windows and outside sills.  They have a guard who watches over the 6-space or so parking area.  One morning I watched as he came in and the wife handed him the pistol in the holster he wears while on duty.  He strapped on the holster then proceeded to load the pistol with bullets.  To guard a 6-space parking area.  At a dentist office.  And I considered it a good thing.  Welcome to Honduras.

Some pictures of My World 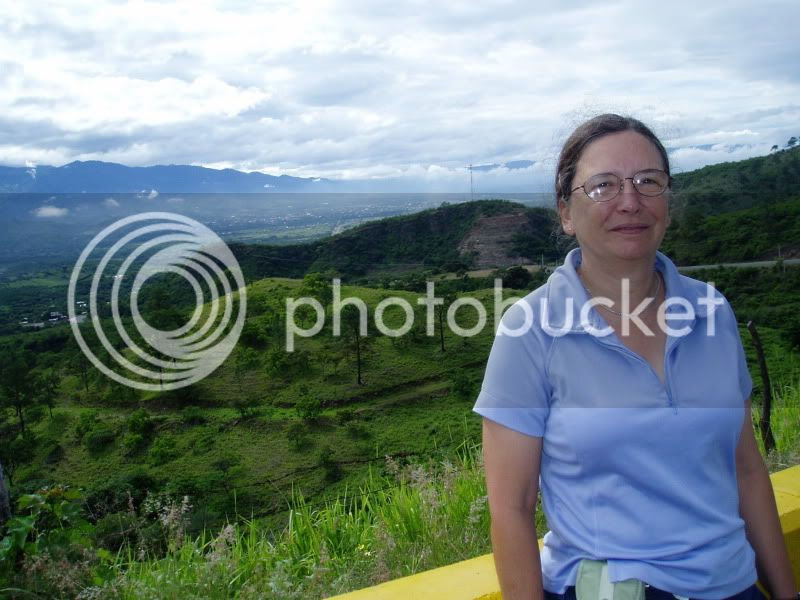 The above is me, and behind me is the valley where I live. I had Carlos, my taxi driver, stop so I could take pictures at this overlook a couple of weeks ago on our way to the dentist. 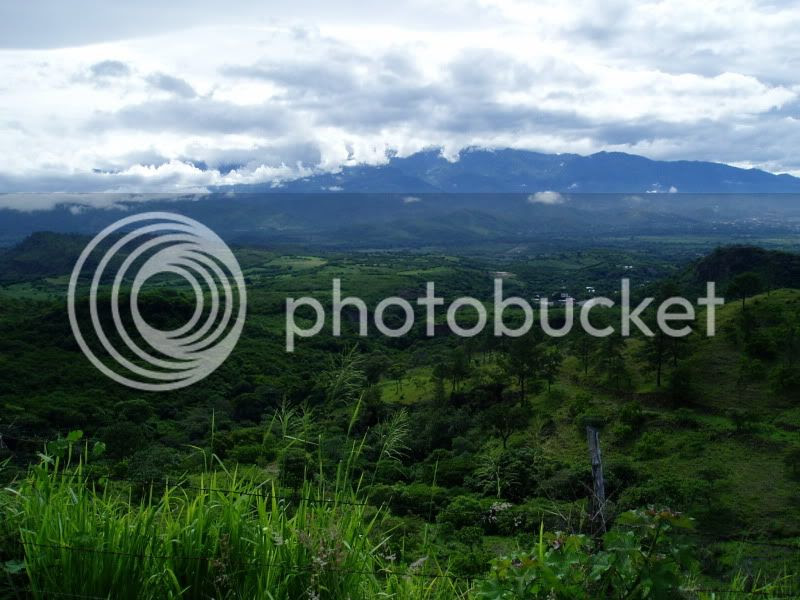 Another picture of the valley. It's hard to photograph, and is bigger than it looks here. 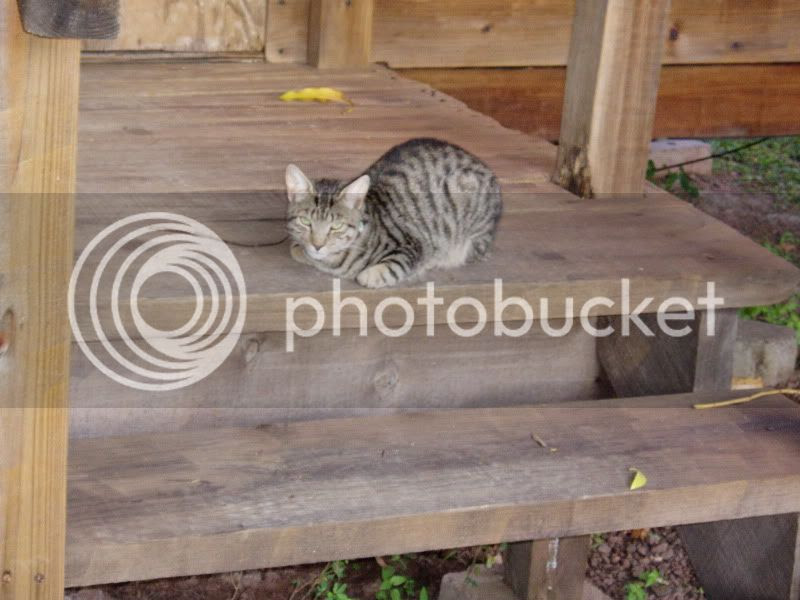 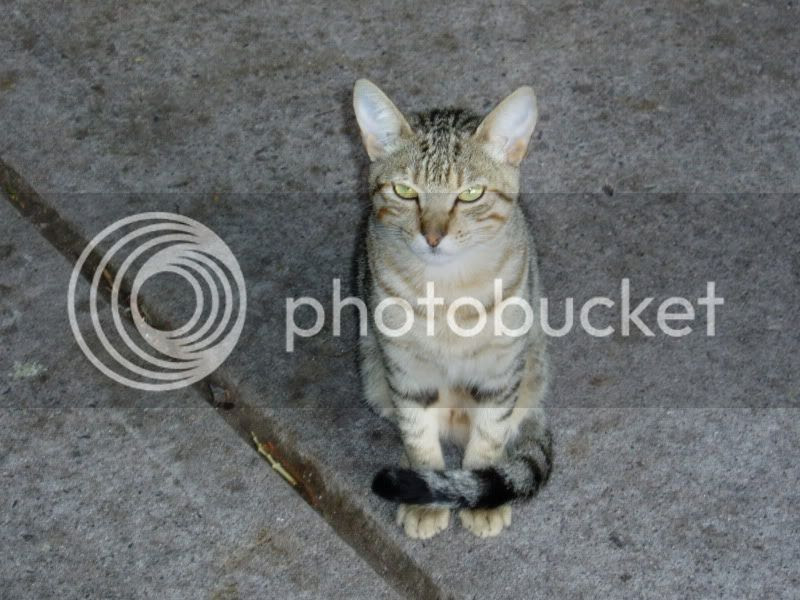 These are 2 of the 3 almost identical adolescent cats who greet me each morning on my way into post. If they are awake, that is. They sleep on the porch of the hooch I walk past. 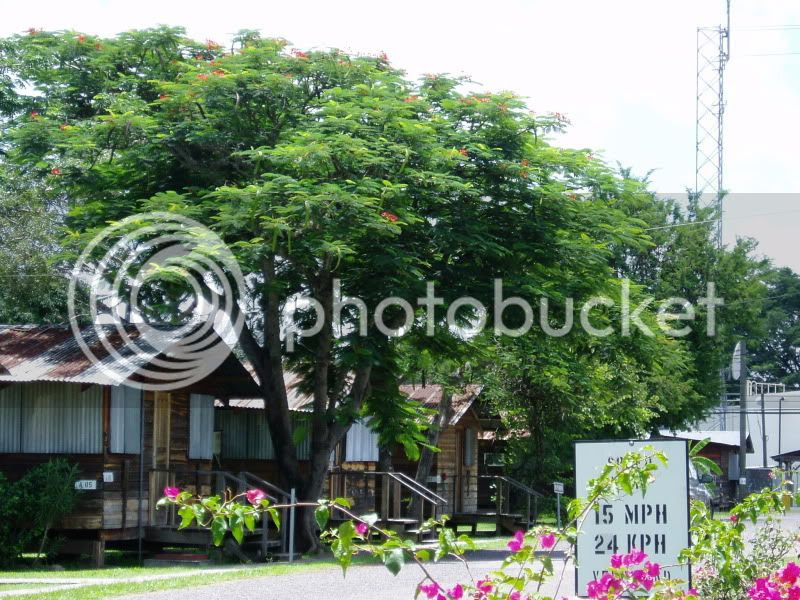 This is the same tree that I posted the picture of when it was all orange. At this point it is pretty much all leafed out. So far it still has the leaves. Soon, it will drop them all for awhile, then start the process all over again.

I'm in Tegus for the weekend. It is a trip just to get away and do some playing and some thinking. And some organizing, mental and physical. While looking for my toothbrush that I was always carrying in my backpack I ended up cleaning out my backpack. I found some fairly important stuff mixed in with trash papers that should have been cleaned out awhile ago. Not sure if I should be worried that the important stuff was there, or the unimportant stuff was since I carry this pack with me pretty much everywhere. What wasn't there was a toothbrush. Oh, well, there is a mall right across the way.

A note to myself: I don't seem to really get my feet stable in a new place for about 10 months. Maybe it was longer in WA, and the time is shortening as I get more used to being mobile. I am just now feeling like I can make inroads into some projects I had intended to do while I was down here 'with nothing to do'.

Oh, I found my knife in the backpack. It's just a cheap pocket knife. However, yesterday while I was watching the guys mow (we have to do that...) the guy weedwhacking got a weed caught in the strings of the whacker and it pulled them way out. His whacker doesn't have the nifty blade to keep the strings cut and they were too long to work. He had a delima, and consulted the guy on the mower (a zero-radius thing I sooo want!). He looked at me (they only speak Spanish, I still don't speak it). I made a motion of a knife cutting, he nodded and said 'no tengo'. I was a bit amazed at that, but later realized that they probably can't bring even a pocket knife on post. With my own knife AWOL, I was forced to ask one of the guys inside for help. He fixed the issue with a HUGE folding knife, then being friendly with me, suggested how I should really carry a knife, the size of the one he has. sigh. I really just needed my pocket knife, I'm not going to be fighting anyone if I can help it, and I really wouldn't pull a knife out if I was. Normally it is in my pocket. At some point I apparently put it in the pack.

I came down here packed minimally. Not entirely just in my daypack. That is a goal. I only have the rollaway with me as luggage. The goal is to be able to travel with just this setup, anywhere, anytime. I'm working on it. At least one of the tops I brought is too tight. In my defense, it was too tight when I bought it. It was an impulse by at REI because it was on the sale rack and I had not yet realized that I am no long a 'small', or even really a loose 'medium'. I guess it should go into the give away pile. For today I'll wear it, and really know that it needs to go away by the end of the day.
Posted by Shadowmoss at 8:45 AM 2 comments:

When I last wrote,  L and the racoons has made peace via some wire over the holes that the racoons had been using to get into the house.  It has become obvious that she had been feeding them for a very long time and just didn't know it as they came and went as they pleased.  L just thought her 2 cats ate a LOT of cat food.  A couple of nights ago L decided to leave a door to the screened in porch open as she used to do pre-raccoon saga.  She heard a noise in the night and got up and saw a tail sticking out of the large can she uses to store the cat food.  She promptly put the lid on the can and put something heavy on top and called her grandson (my age) to come get the raccoon.  He said "Granny, it's 3am" to which she replied that no, it was 5am and to get over there (15 min drive).  So, he shows up and takes the lid off to give the 3(?) racoons inside some air, tapes it so they can't get out and off the (now 3) racoons go to the country.  Being soft-hearted but practical, neither Mom or I have inquired into their fate.  So, the next night she hears more noise, and it turns out that at least one more raccoon has pushed out the wire screen over the hole and in again chowing down.  She chased it and saw how it got out, so now the large trap has again been baited and set.  I'm thinking I'll be hearing raccoon stories (and sharing them here) into the fall.  Did I mention that L is late 80's or early 90's in age?