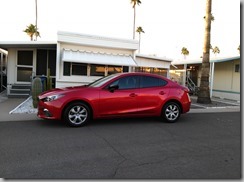 Yesterday I finally got it together and went to the local Chevy dealer to buy a new Spark.  I had the title and spare keys to the Jeep with me.  Turns out that there is not a Chevy Spark with a stick shift to be had around here.  I ended up with this 2014 Mazda3.  I wasn’t sure how I’d feel about getting rid of the Jeep, but I definitely know I need something that gets better gas mileage and that Mom and favorite neighbor can get in and out of.  This does all that.  It is also fun to drive.  The three of us went driving around last night looking at the Christmas lights around Mesa.  The Mormon temple does things up really nice with the Christmas lights.  Next year we will go earlier and walk around rather than just driving by slowly.  The key point for me now is that I can take more than just one fairly agile person with me when I go places.  Time will tell.  I actually did have the thought last week that I would no longer be cool.  This implys that a) I ever was cool just because I drove a Jeep and b) the Jeep is/was the sum total of my coolness.  Still, it is the passing of a part of my life, that lifestyle that I thought required 4WD and off-road ability.

I know I am late to the party, but I do have to admit that using the Open Live Writer instead of the Blogger editor is a nice way to post.  I can start a post and wander around and do other things and come back later and not worry if I lose connection.  Those of you who have used Live Writer all along are going ‘duh’. As a computer professional (read:  inflated ego) I felt I had to use an html editor in order to be ‘real’ or something.  Result was that I didn’t post much.

I think the thyroid medicine is starting to wake me up a bit mentally.  Yesterday I saw mention of on-line courses on Canvas.net that are free.  If you have read much of my earlier blog you might remember that I am really into the idea of free on-line education.  At one point I played with the idea of putting together what I thought my version of an on-line secondary degree might look like, which was not an original idea.  Heather, Wendy Usually Wanders’ daughter was doing that waaaay back when.  I loved the idea.  That was as far as I got, though.

I do feel like I have some major gaps in my education.  Math has always kept me back as I didn’t like most of the math instructors in my high school and therefore never took geometry or any further classes there.  That held me back when I sent for my technical degree, and is why it is a technical degree and not an engineering degree.  I have signed up for the free Math101 at canvas.  I got a 97% on the pre-test, so some of the college pre-calculus stayed with me.  However, I’m going through the videos anyway filling in the the gaps.  They seem to use Khan Academy videos for this, so I may just slide over to Khan to work my way on up from here.  It would be so awesome to actually understand the calculus I faked my way through in college.  It was interesting to stretch a bit mentally taking the pre-test, and probably what my mind needs to feel less foggy.

I did something special today, but I’ll wait until tomorrow to tell about it.

I looked at last year’s post count, 35, and thought how pathetic that is.  Granted I don’t do much to write about anymore, but still…  So the goal was (is?) to beat that count, an easy New Year’s resolution last January.  I’m going to have to post a bit more to catch it.  That says as much about my life as it does about my sitting down to write about it.

Some of my wishes for the next year are to use up/get rid of a lot of the stuff around here, get into better health, and trim my finances so I can make some headway.  I look at all the food I have sitting around, and I started today to cook some of it into things I can take to work instead of my usual frozen dinners.  So far my rice pudding is really tasty rice in coconut milk, raisins, almond slivers, cinnamon and ground cardamon.  It is not pudding.  I added a beat up egg at one point.  Still just rice in coconut milk.  So, ye who know the magic of how to cook, how does one get a nice, creamy pudding?  I don’t tend to use cows milk mostly because I keep as much shelf stable stuff here as I can.  I do have instant milk if that would help.

I have also made some pasta and tomato sauce that not only used up the some of the pasta but also a can of tomato sauce, a small can of mushrooms and various spices that I really need to use up and replace with fresh.

Next up is some rice with the Tasty Bite Indian various things I have.  I figure I’ll eat it one night and take it in to work the next day.  I buy the Tasty Bite stuff by the case, usually.  I really love Indian food.  I also bought a 25lb bag of rice at one point.  Costco for the win!

I didn’t realize this Open Live Writer doesn’t have a spell check until Al mentioned it.  Expect mis-spellings to abound.  I just checked one word by opening a new email and typing it there, then correcting it here.  That works if I realize I’ve spelled it incorrectly but can’t figure out the right way.  Some things just float by and I would not realize it until I see the red squiggly line telling me to stop and go back.  You have been warned.

It is early evening Christmas Day here.  After I got off work yesterday Croft and Norma had a few of us over for a Christmas Eve sit around the propane campfire.  Mom and I and Favorite Neighbor were then joined by Sandie and Jim Dixon.  RVing stories came out and good food was stuffed into my mouth.

Today Mom and Favorite Neighbor and Croft and Norma and I all went to the pitch-in dinner at the club house here in the park.  Lots of food.  I waddled home and fell into a nap that ended up lasting all afternoon.  Mom has said I need to come and get some of the left over food that she had taken.  I’m gaining weight just thinking about all the food the past few days.

Hopefully tomorrow I can start some projects around here.  The usual sorting and getting rid of clothes and papers and such.  I’m also wanting to trade off the Jeep for something smaller and better on gas.  I will need more motivation than I’ve had today, that is for sure.  I’m thinking Mom’s Christmas cookies won’t help in that department.

I tried posting a picture and changing to a scheduled time to post that was set to the time I was creating the post.  For some reason it scheduled it 8 hours out from that according to the Blogger editor side.  I also got the 403 error.  I set up the blog again as if it was a second blog, but used the same info (shows twice in my blog is in Open Live Writer), and the picture posted.  We may get the original post without the picture later on, not sure.

I’m going to try to post this with a picture to see if it fails on the second attempt to post a post with a picture.  The problem is somewhere in the authentication level, I just can’t find it yet.  Sorry to spam my own blog… 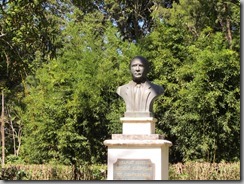 Other folks who post a lot more than I do are still having issues.  I’m going to play a bit here to see if my success was more of a fluke, or if I just by habit pushed the right buttons.  I’m a geek.  This is what geeks do. 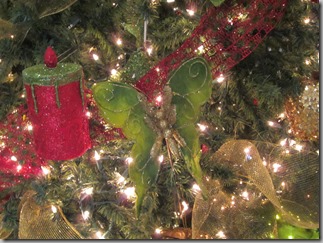 This is a picture from my c: drive, pictures library.  It is a tree in Honduras Christmas tree at the hotel in Honduras a few years ago.  I put a 5px margin on it, and aligned it such that the text is on the right.  If I keep doing this I’m going to have to start taking pictures again just to have something to play with.

This time I also set the publish date for today.  I noticed that on other’s blog lists my post didn’t show up very quickly.  I notice that with some folks blogs in my own sidebar, they always show up down in the list, even though I have read the ones posted above them.  If that makes sense…  It is like it knows when it was posted and puts it in the line there, but doesn’t show it for awhile.  So, it is never the latest post.  I’ll see if this helps.

Trying to use picture straight from my computer…

While I’m playing with this, I may as well try all the new gadgets. 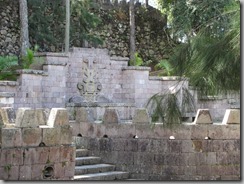 Ok, this iis a picture from the park in Honduras.  I didn’t upload it first to Photobucket.  I’m guessing that this is how you folks can put so many nice pictures easily in your blogs.  I’ve always downloaded from the camera first, then uploaded to Photobucket, then added into the Blogger editor.  Which is why I don’t have a lot of pictures on this blog.  I also managed to add a margin to the picture so the text doesn’t line up against it.  I’ll attempt to publish now.

I’m going to insert a photo from Boyce Thompson State Park that I already had uploaded to Photobucket.

So far so good…  Let me see if I can move it and resize it.

I didn’t set any margins when I put this in, and I can’t figure out how to get back to that part of the editing.  Sizing is easy, though.  I could play with this and make it better, but this is a test post anyway.

If folks have issues with pictures, you can always try using Photobucket.com for free online photo storage.  I’ve used them for years to hold my blog pictures.

I’m going to hit Publish and see what happens.

Posted by Shadowmoss at 1:08 PM No comments:

I have always just used the Blogger editor to post to this blog.  I play enough with HTML that I can pretty much get what I want by using whatever big hammer I need with that.  However, with all the discussions I decided to try this new toy.  I try open source software much more than I do Windows software, so here we go.

Cool, I can preview from here, and it gives me a ‘souce’ tab to use my hammer (HTML) directly if I want.