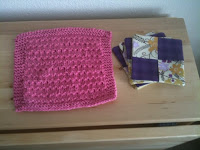 Here is the dishcloth I finally finished. Somewhere near the end, just today, I finally relaxed into the Continental method of knitting - holding the yarn in my left hand rather than my right - and started enjoying knitting again. So, this project has done what I wanted. That was the first reason for knitting dishcloths again. The second reason will come to pass when I get it in the mail this week to MadCap, which was to return her kindness in sending me the fabric coasters sitting next to the dishcloth in the picture. Now I will start Cathy's dishcloth. Then, I have a few other projects lined up.

I have a large amount of acrylic yarn left from the days I used to knit with that type of yarn. These days I usually use natural fibers such as wool, cotton or bamboo. What to do with this still pretty yarn was my problem. Friday I was reading an article in Guideposts (a Christian magazine that a co-worker brings in) where the author was describing how what he 'needed' to do was put in front of him despite his continued pushing it away. At the end of the article was a small blurb that said that if you were participating in the 'Knit for Kids' project to send it to this new address. Hmmmm. I searched online and found the pattern they use, which is very simple and just a step above my dishcloths in difficulty. I also saw that this could be a way to continue to practice, to use up my acrylic yarn, and to do some good in the process. We'll see how far my good intentions get with this.
Posted by Shadowmoss at 1:32 PM 1 comment:

My tooth (or lack of) is now basically healed. I had one day where I went back on pain medication, but for the most part it's over. I'll have an implant sometime in the next 6 months. Now it's time to work on the next big health issue: new glasses. I'll start the research on that this week. I'm using my health account money for that, and am hoping to get contacts this time. Some places will give me contacts, some won't. The time I got them, I was part way through the process and lost my job, and at the time my insurance, so I just went back to the glasses I had already gotten.

The home organization is proceeding. The spare bedroom is straightened up now. I could have company stay in there and have room to put an air mattress on the floor. I just did hand laundry, and discovered that a wool sweater that has been set back to be washed for however long has a large hole in it. This sweater has been darned several times already and was one I only wore around the house anyway. Another thing out of the house, although if I'd taken better care of it maybe the moths wouldn't have eaten it. As I unpack the smaller boxes and suitcases I'm finding the things I'd wondered where they got off to. Sets of things are getting all their parts back in one place. Items are getting washed down and put away neatly. I'm getting organized. Finally.

Reading a blog from a 30-something tonight has me feeling old. He is new-age enough that the use of technology comes as easy as breathing to him it seems. He has everything on-line and organized. I am old-school enough to worry about a 3rd party having that much of my personal information locked away in their servers instead of in my own hands. Google somewhat frightens me with it's gathering of all of my personal details. I'm one of the ones who wrote a nasty note to them for opening up my email contacts to the world in order to 'help' me 'connect' with everyone and tell them all my personal thoughts 24/7 via their new 'BUZZ'. I don't subscribe to any personal networking sites other than these two blogs, which are the same whether you are seeing it on LiveJournal or Blogger. I have no need to constantly hear (read?) my friends 140 character thoughts. I prefer the longer format of a journal, or heck, give me a call. I do have the cell phone and it is even sometimes on and near enough to me I can hear it. As for finding my old school chums and such, I didn't particularly fit in or like them when we went to school together. My 20th reunion solidified that thought, and I've not gone back. Why would I want to find them, or have them find me, on facebook or some such site? Google buzz can buzz off. I did find the link to turn it off. I had already found a different mail client to use if I couldn't disable it on gmail.

So, now that I've confessed and vented, I think I'll finish my Sunday evening off by starting the process of doing my taxes. I know it's early. Heck, it isn't April yet, so there's no hurry.
Posted by Shadowmoss at 8:18 PM No comments:

Yesterday I had the broken tooth pulled. It wasn't that bad an experience, thanks to various pills and 'laughing' gas. I wasn't laughing so much, but other than my fingers making permanent imbedded marks on their chair due to stress (there was no pain involved at all) it was not as bad as I had thought. It does feel strange to have this LARGE gap on one side of my mouth. In a few months I hope to get an implant. However, from this point on my over all health should improve. I have high hopes anyway. I'm on antibiotics that I asked for just in case. I have several types of painkillers. So far, I'm tapering off a bit on them. I'll keep up the Motrin for a few days yet just in case.

I am working on the dishcloths. I was making beginner mistakes, and forgetting how to knit. Since this is something I've done since I was 10, it is difficult for me to be in this space. Holding the yarn is an issue, can't seem to find a way to keep the right tension on it holding it in my left hand. That will come. I was also knitting into the stitch wrong. All in all, I've started the first 'production' dishcloth. I'm trying to stay out of trouble for the next few weeks, so knitting should be front and center. Cathy, have you in the queue. Soon as MadCap's is in the post to Canada, your's will be next.
Posted by Shadowmoss at 6:45 PM No comments:

Or rather, lack of it. After the push of getting things done I last wrote about, I crashed and burned again for a couple of weeks. I'm coming out of it a bit now. Yesterday I went to a local yarn shop and got some cotton to make dishcloths. I am changing the technique I use to knit, from English to Continental. For you normal folks, that means that instead of holding the yarn in my right hand as I have for 40+ years, I'm learning to hold it in my left hand. There will be advantages as I get better at it. For now, a flat dishcloth is a good thing to make while I get used to the new movements I need to make with the needles and yarn. Which brings me to a give-away. I was the honored recipient of a beautiful set of 4 fabric coasters from MadCap. I have been inspired to return the favor, so she gets this first dishcloth if it turns out remotely useful. Actually, I'm really liking the feel of the cotton I got to make it. However, I think I have at least 3 other readers here, so if any of you would like a hand made cotton dishcloth, just comment telling me so. If I don't have your email address, we'll figure out some way to connect so I can get it to you. This is also my way to get into the energy of the blogosphere where these giveaways happen on a regular basis with the hobby oriented blogs. At this point I can't imagine more of you wanting one than I can make, and if I get bored I may change to a hat or something instead to give away. I've a lot of yarn in my stash to make up into something. I still bought some more yesterday...

I joined Costco last weekend. While I was shopping they were demoing liquid vitamin D. I tried some and my body kept telling me that I wanted more. So, I added the two bottles of it to my cart and I'm taking a shot of it every night. It tastes really good. Can't really say that it is why I'm getting more perky now, but it can't be hurting.

Next Friday I have this broken tooth surgically extracted. It is time, and I'm looking forward to having it gone. Not to say I'm looking forward to the process. I have prescriptions for Valium and antibiotics. I'll walk to the dentist's office .75 mile away, and get picked up and brought home by Cindi on her lunch break. Time to find my missing generic Ipod, or figure out how to put songs on my IPhone, and load up a lot of heavy rock and roll to listen to while in the chair. I haven't taken Valium since the 70's.
Posted by Shadowmoss at 12:21 PM No comments: