Necessity is the Mother 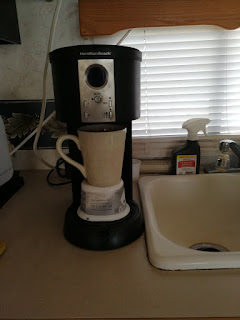 Mom is down to help me move my motorhome up to my summer spot. In preparation for the move, I have been taking a lot of the clutter out of the motorhome and putting it into storage. When it came time to make coffee for Mom I not only didn't have the smaller coffee maker, I didn't have any of the large tumbler's my coffee maker requires. Shown is my solution to get a regular cup up high enough to not splash all over while the coffee drips into the mug. I normally use that plastic tub to catch drips when I first take the tumbler out from under the basket. Multipurpose. And I hadn't even had my own coffee yet.

We both went to LensCrafters yesterday and got eye exams and ordered new glasses. They will be in sometime next week, and we will make a trip back down to get them. We have also eaten at a couple of restaurants along the way. I won't need a large meal for a few days

Once I get going I'll start the prep to move the RV up the road and Mom will follow me in her car. My car is already up there. Then I can settle in for the summer.

Norma Randle July 27, 1942 - March 24, 2019
That was copied from Croft's blog where he announced that his life partner, Norma, died yesterday.  I really have no words to express how I feel.  Norma and Croft came into my life during a time when I was pretty lost.  Norma scooped me up and made me feel like family.  Her no nonsense attitude was just what I needed on a regular basis.  I was hoping that I would see them this summer, planning on seeing if I could come to them if they were again not coming down here to AZ.  I have a lot of questions I want to ask her about everything from fashion for my over-60 self to deeper life questions.
Please keep Croft and the rest of Norma's family in you thoughts.
Posted by Shadowmoss at 2:00 PM 5 comments:

I seem to have lost my blog voice

I think of things I'd like to write about, but I stop before I get to a computer or the phone to actually write and post.  Maybe I've met too many people in real life who read my blog.  This isn't just some writing I lob into the blogosphere with no repercussions any more.  I think about some who I feel will judge me.  Then again, I don't tend to spend much time worrying about folks that don't think I measure up, so I don't know why that would be a factor.  I go through low energy times during transition, and this is definitely a time of transition.  I'm in the process of having the Class A worked on tomorrow, and then on the 1st I'll move to my spot in Payson.
It seems that a lot of people I know, or relatives of close friends, are having major health issues.  Every time I turn around it seems that I'm hearing of someone who has just been diagnosed with cancer or other health issues.  I keep these folks in my thoughts, and so far the ones I've heard about lately are on an upward swing.  Then my friend Mike calls me and his younger brother has just been diagnosed with brain cancer.  Mike lost his best friend to brain cancer about the time I was going through my breast cancer operation and radiation.  After awhile it becomes a lot to process.
Norma, of Croft and Norma, is going through radiation.  I keep her in my thoughts.  Jim Dixon seems to have finally gotten his issues straightened out.  I became worried about him when he wouldn't even eat ice cream.  I need to check that he actually has finished the container that I know was in their freezer.  Favorite Neighbor, who is in her 90's, just had major surgery, and has another surgery this Thursday.  So far she is doing well.  Hopefully this will fix the issues that were starting to paralyze her, ongoing issues from the fall she took a few years ago.
I'm looking forward to being camped in my spot in Payson with all getting back right in my world.  In good news Mom feels better than she has in over a year.  Today is her 88th birthday.  I'll take all the good news I can get.
Posted by Shadowmoss at 1:04 PM 8 comments: 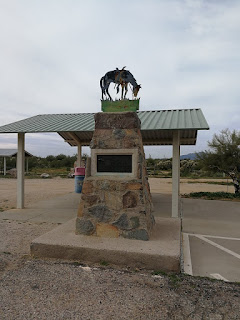 I'm heading down to tour Biosphere 2. The Tom Mix Memorial is on Hwy 79 south of Florence, AZ. I've never been this way before and decided it was worth a stop. It is overcast, and a storm is expected tonight or tomorrow. Everything is green from the previous rains. It is good to get out for a day.