Better a bit late than never.  I didn’t take many pictures and then couldn’t find my blog email address to post them directly from my phone while I was there yesterday.  Need to get that part set up better.  Anyway, here is the one picture I did take early on as folks were beginning to arrive.  There were so many cameras out that I know there will be a lot better pictures out there in blogland this morning. 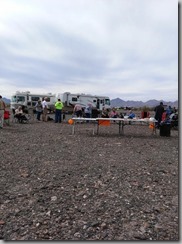 I had a total blast yesterday.  After I posted the blog I loaded up and went to pick up Croft.  After loading up his stuff amid directions from Norma on how to store the tray of whatever we got for the snack and other important things we headed to Frys and picked up the first cheese tray we found and stuck it in a totally different cooler.  I did try to do it the way Norma had suggested…

The little red car didn’t loose any time heading out to Quartzsite (looked up the spelling this time).  We figured the gas mileage on the way home and  I got 40 mpg on this trip.  Woo Hoo little red car!  I got off at the first exit and cruised slowly through town down to the McDonalds.  We went in and got breakfast and I texted Rod to say we were in town.  He was held up at his ham (amature radio) end of the week prize drawing, but would be out as soon as it was over.  I wanted to look at a couple of class B rv’s I’d noticed on the way through town, so we stopped in.  I let Croft keep the salesman busy, as I’m sure the salesman thought he was smoozing the decision maker of the two of us while I checked them out.  Nice rigs but more than I can go even used.  There was a 2000 Mini Winnie that was only $20k that was in good shape and that is probably the range I’ll end up with.  Nice to see what is around used.

We went to the big tent.  I did some creative parking out along the edge as I’d rather walk than crowd in to get a better parking space.  Croft and I meandered through the maket and tent.  I spent some money on a set of 5 toys, the rubber balls that splat flat when you throw them, then gather themselves up into a ball again.  Sorry, they make me smile and I think I’ll use them to take out my frustrations.  I also picked up a couple of the small folding step stools, one for me and one for Mom.

At the blogfest Sandie Dixon came out to greet me and whle Croft caught up with George and Suzie I went over to Doug and Toni’s rig and talked to Jim and Sandie and them while they polished off a spead of food Toni had put out.  Folks started arriving and signing in and putting on name tags.  As we went around the circle and folks stood up and introduced themselves I would be surprised ‘Hey, I know that person!’ over and over.  Folks like Merikay and Craig, Glenda, Ivan, Mark and Bobby, and so on.  I did meet the ones I was most looking forward to meeting, Pheebs (and Al and Kelly of Bayfield Bunch) and Yuma (with Doug and Dolly of Miss Adventure Travels)  Miss Fergie, Yuma’s older sibling was adorable in a cute dress.  Dolly said the problem when Yuma came to live with them was that Fergie didn’t know she was a dog until then.

I know that others are all typing out their own stories of the day.  I was totally blown away with just how NICE everyone is.  Folks I thought wouldn’t give me much notice at all talked to me for several minutes and I loved talking to them as much, probably more, than I enjoy reading their blogs.  I came away with a few resolutions.  One is to start doing things I can write about.  Time to get out of this rut.  Another is to get serious about dealing with the things I need to in order to get into my own rv and get out there and enjoy the life these folks are so obviously having so much fun living.
Posted by Shadowmoss at 5:57 AM