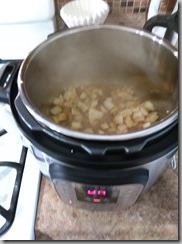 I guess there are those who are lucky enough not to hear all the cool things one can buy these days who haven’t a clue what I was talking about in the previous post.  An Instant Pot is a combination electric pressure cooker, slow cooker, rice cooker, yogurt maker, saute pan, steamer, food warmer, and many more things I’m sure.

I got the recipe from the Instant Pot site.  First I pressed the saute button.  Then I remembered I need to plug it in first.  I put coconut oil in the inner stainless steel pot and again pressed saute and it started heating.  Dumped in the chopped onions, garlic, and curry powder.  Cooked until I thought it was cooked enough. 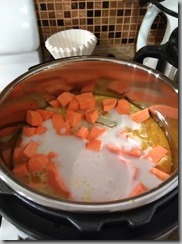 I then put the rest of the ingredients in, which included a can of coconut milk, the cubed sweet potatoes, and frozen container of chicken broth I’d made a few months ago.  I ended up setting up a worst case.  Not intentionally.  That is just how things tend to go in my life.  Such as, I probably should have considered doing this last night and taken the chicken broth out to thaw instead of dumping it in as a frozen chunk.  Not the least of the reasons being I splashed coconut milk/curry on my top as it slid in.  When I put all the rest of the ingredients in and it didn’t look like enough liquid so I pulled out the carton of Silk Coconut Milk (for drinking?) I had and tasted it to see if it was still good.  It was, so I added some to the pot.  I’m probably a bit over full here from what the instructions say.

I set the pot to 10 minutes on high pressure.  It came up to pressure automatically, stayed at high pressure for 10 min, then went to keep warm and let the pressure down as it sat.  I just wait for the beeps.   I did the trial run with water last night, and I have to say that even releasing the steam pressure manually is easy and safe.  That is why I got this.  I’m finding I need cooking appliances that turn themselves off automatically, as I get distracted these days.  I forgot I was toasting an English Muffin yesterday.  It was cold, but not burnt to a crisp, since I used the press down toaster function on the older toaster oven I have and it turned itself off when it popped up.  Hopefully the InstaPot will keep me from burning down the kitchen in a similar situation. 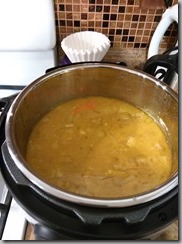 This is what it looked like after I let the steam off and opened it up.  I wasn’t ready to do anything with it yet, so I turned it back on keep warm and put the lid back on.  I ran around and did some errands, one of which was to pick up the rest of my order from Walmart.  Since I ordered this from the Evil Empire, it came bundled free with a Ninja blender/food processor.  I went and got it (shipped separately from the Instant Pot) and blended the soup in it.  No more pictures. though.

The verdict is that it is good.  Especially since I love squash soup and I have never had the nerve to try to make it myself.  It needed less liquid or more sweet potatoes.  I need to stop cooking for an army when I cook as I’m running out of freezer space.  It needed more spice, a common issue with my cooking.  The curry gives it some heat, which I’m enjoying as I somehow picked up a cold the past few days.  All in all, the soup, the Instant Pot and the Ninja blender seem to be keepers.

Posted by Shadowmoss at 3:04 PM