I was (am?) in the end of summer spinning in circles.  I feel like doing Something but it isn't time to move to the Valley yet.  My trip down where I visited Jim and Sandie, on the excuse I came down to buy coffee, helped.  I decided to take a trip East.  On my trips there are places that I keep thinking "I should stop and check that out sometime".    Since the weather is cooling off now seemed like a good time.  Sandie gave some excellent suggestions of places I didn't even know about.

I left last Monday.  Unfortunately the Wolf Sanctuary is closed on Mondays.  Ok, I'll stop there on the way home.  I took the long way towards Albuquerque, heading on the back State Highways to check out a couple of free campgrounds I found on Freecampsites.net on the way.  First up was going back to the Fish and Wildlife campground at Concho Lake.  I decided to go through Snowflake rather than Show Low as it looked like it was a more direct route.  It was, right up until the sign said that that State Highway 277 ended.  Turned out, after a McDonalds stop to confer with Sandie via text and much staring at Google Maps, that a road does indeed head on out, it just isn't 277.  Snowflake is larger that I thought, so it was a detour that showed me new things.  The campground at Concho Lake is ok for smaller rigs, as in vans or tents.  The lake is almost not a lake anymore.  The boat ramp ends in weeds, far from the receding water line.  No pictures as I couldn't figure out how to take one that wasn't a bit depressing given the state of the lake.

On to Petrified Forest.  I stopped at the museum/gift shop/campground located before the actual entrance to the park. 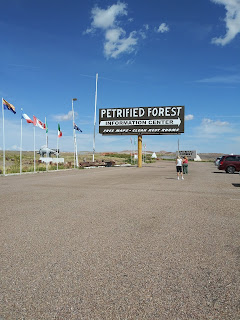 The campground looked fine for larger rigs.  The reviews at Freecampsites.net mention NOT to try to camp if you aren't self contained.  The on-site manager gets almost psycho on folks who think they might just car camp.  Electricity is available for an extra charge, again according to the reviews. 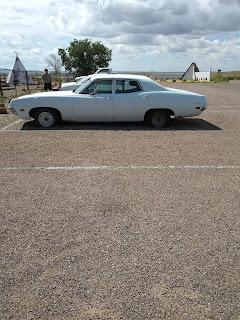 Also mentioned are the several cars parked outside that all have flat tires.  Apparently it is to make the place look popular.  Until the condition of the vehicle is noticed it works. 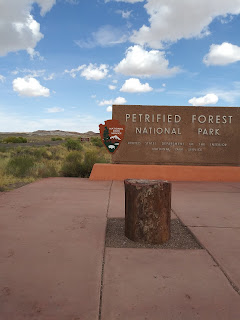 On to the actual park.  I got in free with my Golden Geezer pass.  As I was walking the loop behind the south Visitor Center I noticed a very large dark cloud in the distance.  The workers were packing their tools and leaving.  I, of course, decided that there were probably some dramatic pictures to be had from the higher points ahead on the trail. 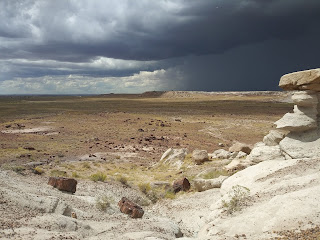 About this point I made some realizations.  Not about safety.  I realized that I am not an exceptional photographer.  I also realized that there are many, many bloggers who have given wonderful trip reports with pictures that eclipse anything I choose to do about anywhere I might visit.  So, no iconic pictures from this, or probably most other, parks or public gatherings places.  I also realized that with the approaching rain this would not be an in depth visit, but I live close enough to come back pretty much anytime I want.  With that, I got back in the car (after buying a nice top in the gift shop...) and drove through the rain to the other end. 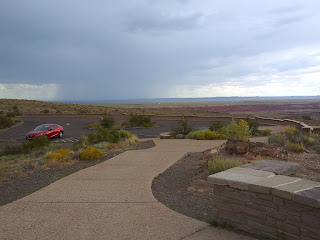 This picture shows the storm back in the middle of the park that I drove through.  It also shows that not a lot of folks were visiting that day.


I need to get moving today, so I'll do the short version of the rest of the trip tomorrow.
Posted by Shadowmoss at 11:32 AM